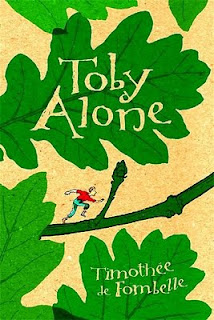 Fast-paced adventure novel about Toby who is only 1,5mm tall. He is betrayed by everyone but only friend Elisha, who helps Toby to escape the ones who hunt for Toby and his family. Get this: his family lived in a tree but now they are expelled to lower branches.

This book is not for everyone, but i liked it because it was very fast-paced.

Posted by Bryan Roeder at 8:11 PM No comments:

Profound story of life going on midst the devastating war. Parvana,  a young girl in search of her parents, is travelling through war torn Afghanistan. On her way she makes a new family with other children of war: abandoned baby Hassan, eight year old Leila and Asif, a boy who is missing a leg. They walk through the war, encountering devastation, death, hunger and pain.


Ksenia R
Posted by Bryan Roeder at 10:51 PM No comments: 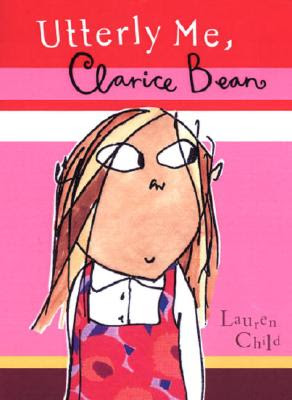 Utterly Me, Clarice Bean by Lauren Child is a fast-paced chapter book that switches gears on nearly every page.  Clarice narrates the story through diary entries about her daily life - each day is utterly exciting and always suspenseful as she pursues the coveted silver cup for the best book project while trying to solve all the mysterious things happening all around her.  From her perspective, Clarice introduces us to her family including her younger brother who tends to be "utterly a nuisance", her classmates, her utterly best friend, Betty Moody, her horrible teacher Mrs. Wilberton and other adults at her school as well as her favorite heroine: Ruby Redfort, schoolgirl detective and other characters in her favorite series of books. The story line is one that anyone who remembers the anxiety of a school project can relate to but in the end, it is really a story of meaningful friendship and the love of reading.
I very much enjoyed fun and quirky, witty and wacky text.  I know I was smiling the whole time I was reading.

Bonnie R
Posted by Bryan Roeder at 5:36 PM No comments:

Lotta's Bike is a story about a little girl Lotta who really wants to have a two wheel bike like her brothers have. When on her birthday mom and dad did not buy a bicycle for her, Lotta decides to borrow it from "auntie Berg", a sweet and caring neighbor. Lotta surely will get in trouble with a two wheel bike, but everything ends well. Astrid Lindgren is a very engaging Swedish author, who is very well known and loved in Europe and Russia. Unfortunately very few of her books are known in the USA with the exception of Pippi Longstocking.
Other Lindgren's characters are Karlson, a flying man with a propeller; Emil from Lennerberg and Kalle Blumkvist, a detective. 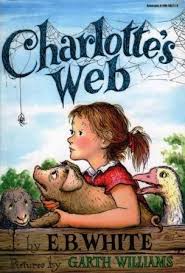 CHARLOTTE'S WEB by E.B. White is a masterful blend of whimsy, humor, gentle satire, and life-and-death drama and, above all, a powerful story of friendship.  How sweet it was to share it with my friend, Myra.  She could hardly get past the thought of the central characters being a pig, a spider and a rat but as we listened in on their conversations (Did I mention that these animals talked?) we were deeply moved by the loyalty, kindness and wisdom portrayed in this wonderful barnyard fable.  Its a children's book which has much offer to adult readers.  Complemented by the charming illustrations of Garth Williams, the story starts with an eight year old farm girl, Fern, who rescued a piglet about to be killed because he was the "runt" of the litter, and named him Wilbur. When Wilbur was weaned from the bottle he was sold to Fern's aunt and uncle just down the road where Fern visited him often.  It was there that he was befriended by a very wise, loving and skilled spider (...yeah, one of those dreadfully scary, eight-legged, blood sucking creatures!) by the name of Charlotte and several other barnyard animals who could speak both with each other and with Fern.  They were all a bunch of characters with distinct personalities and roles but one of the truly marvelous characters was Templeton the rat. Gluttonous, sneaky, often nasty, but curiously sympathetic and helpful, he's one you just hate to love but you can't help it!  Templeton is what we call a great anti-hero.  But the true heroine is the dear little gray spider, Charlotte who promises Wilbur she will save him from the way that most pigs go. (bacon and ham you know)   And, she did, of course!
My favorite lines.....
A moment later a tear came to Wilbur's eye. "Oh, Charlotte, he said.  "To think that when I first met you I thought you were cruel and bloodthirsty!" When he recovered from his emotion, he spoke again."Why did you do all this for me?" he asked. "I don't deserve it.  I've never done anything for you."
"You have been my friend," replied Charlotte."That in itself is a tremendous thing, I wove my web for you because I liked you.  After all, what's a life, anyway?  We're born, we live a little while, we die.  A spider's life can't help being something of a mess, with all this trapping and eating flies.  By helping you, perhaps I was trying to lift my life a trifle.  Heaven knows anyone can stand a little of that."
"Well." said Wilbur.  "I'm no good at making speeches. I haven't got your gift for words.  But you have saved me, Charlotte, and I would gladly give my life for you---I really would."
Bonnie R
223 OF 1001
Posted by Bryan Roeder at 12:10 AM No comments:

YOU'RE ALL MY FAVORITES by Sam McBratney 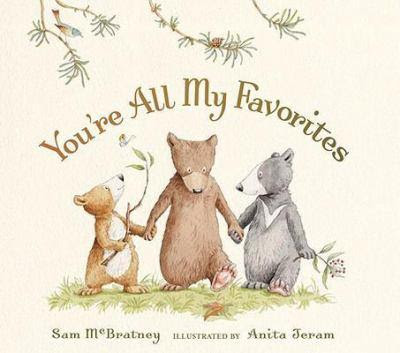 YOU'RE ALL MY FAVORITES written by Sam McBratney and illustrated by Anita Jeram is the sweet story of a mother bear, a father bear and three baby bears not unlike any loving family of five... not unlike my own.  It shows that no matter if the baby is a boy or a girl, big or small or has different features each is loved unconditionally.  I always felt I did a good job of making our three sons know this.  No mater which on you might ask, he will tell you he has always been my favorite!

Posted by Bryan Roeder at 12:08 AM No comments:

MR AND MRS PIG'S EVENING OUT by Mary Rayner 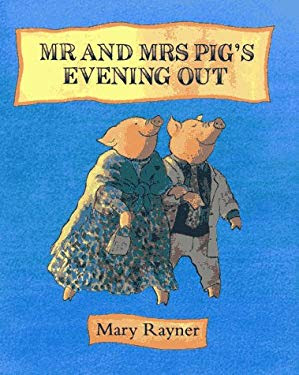 MR AND MRS PIG'S EVENING OUT by Mary Rayner is a delightfully illustrated story, not so much about the joys of an evening away from their ten darling little piglets as it is about the wit and resourcefulness of the piglets to deal with what was suppose to be a very nice lady from "the agency".  Unnoticed by the parents, anxious to get out the door after tucking their little ones into bed, they left them with one who turned out to be a very untrustworthy babysitter by the name of Mrs. Wolf.  Parents returning to a babysitter in restraints is not usually the happy ending of a night out, but in this case, it was.
221 OF 1001
Bonnie R
Posted by Bryan Roeder at 12:06 AM No comments: