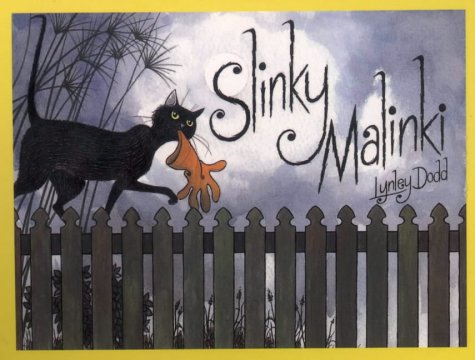 Lynley Dodd's SLINKY MALINKI is a cat who is "blacker than black, a stalking and lurking adventurous cat".  The rhyming text tells us that during the day, Slinky Malinki is a "cheeky and cheerful" cat who chases after leaves and rolls in the sun. "But at night he was wicked and fiendish and sly.  Through moonlight and shadow he'd prowl and he'd pry."  To be brief... He turns into (gasp!) a thief. He steals all sorts of items from the neighbors. Then one night he steals more than usual, gets caught, and ends up "in disgrace".  Fortunately it was his family that caught him, the items were returned, and Slinky Malinki was a reformed cat.

Dodd's illustrations capture that feline independence that makes us cat lovers.  Slinky Malinki took me back to the mid 70s when the guys were cleaning their catch of the day in our back yard and a black cat stole a fish.  He returned, adopted us and stole our hearts.   We named him Snuggles.