THE STORY ABOUT PING 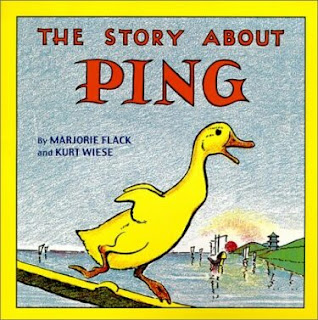 As I looked through our resource book, 1001 Books You Should Read Before You Grow Up, for familiar titles I found THE STORY ABOUT PING written by Marjorie Flack and illustrated by Kurt Wiese.  I read it and wondered why the title was familiar to me.  It seemed to me that I was reading a story I had never read before.  Ping was a beautiful, spirited little duck who lived on the Yangtze river.  Domesticated, he and his family were sent out every morning to forage along the river, and were expected back every evening. One day, to avoid a spanking for being the last one back, he intentionally hid but unintentionally got lost.  Oh, the experience he had!  My definition of experience is what you're getting when you're not getting what you want.  Ping learned a valuable lesson....  Better late than never!  After I finished, I did a little research and discovered THE STORY ABOUT PING has appeared on television since the 1950s.  Captain Kangaroo (or his friend Mr. Greenjeans) read Ping once a week on his show for seventeen years, while displaying its colorful illustrations in stark black and white on the screen.  That must have been it!  I rarely missed an episode of Captain Kangaroo!
Bonnie R.
p.s. Soupy Sales and Howdy Doody both featured Ping on numerous occasions, and Shari Lewis's sock puppet Lambchop once played the role of Ping in an adaptation for sock puppets and ventriloquists.  Sesame Street had an animated version that ran in the 1970's.  I may have never turned the pages of this book but I saw it on many occasions, I'm sure!